Dholpur has a strategic location in the mid of two famous cities, Agra and Gwalior. It has high influx of tourists who come to explore the untapped beauty of this historic town. There are some business and industries flourishing in this region. The population of Dholpur is also expanding with times. All these factors combined demand better infrastructure of road and rails for easy transportation. As such, local administration of Dholpur ensures efficient transport facilities to reach the city and also travel within it. At the district level, there are well laid out roads for smooth transportation facilities. Railways also have strong presence in this region for convenience of travelers and daily passengers. Transport facilities available in Dholpur are:

Dholpur is well connected by railway network. It has around 35 express trains having halt at its railway station. It is situated on broad gauge line of Delhi to Mumbai route that passes through Jhansi. It falls under North Central Railway Zone and Jhansi Division. Railway station at Dholpur has three platforms and the station code is DHO. Apart from this main railway station, there are other smaller junctions in various towns of the district. The nearest major railway station from Dholpur is located at Gwalior. Dholpur has easy connectivity from major cities like Mumbai, Delhi, Amritsar, Indore, Gwalior, Jammu, Pune, Mangalore, etc.

There is a narrow gauge railway line between Dholpur and Bari which runs from Dholpur on Agra - Jhansi route. The carriages on this railway line are retro in looks with plank seats, luggage racks, half glass windows, and old builder’s plates. Since Bari is the main town on this line, it has long halt at Bari and this train can also be called as Metro of Dholpur. This ancient 110 years old rail of Dholpur connects many of its villages while offering a delightful journey as well.

Dholpur is exactly located along the National Highway 3 running from Agra to Mumbai. Another National Highway 11B also passes through Dholpur. These national highways along with state roads connect Dholpur with all major cities of Rajasthan and neighboring states of Uttar Pradesh and Madhya Pradesh. As such, bus services are quite easily available to and from Dholpur. There are Rajasthan State Road Transport Corporation (RSRTC) buses that ply to different parts in and around the district.

The district has around 17 routes on which more than 5 operators run their bus services. These operators offer variety of bus options to the travelers. It includes Volvo buses, AC coaches, Volvo AC sleeper, AC seater buses, AC sleeper buses, Non AC seater and Sleeper buses. Some of the most common bus routes from Dholpur are Dholpur - Jaipur, Dholpur - Agra, Dholpur - Gwalior, etc.

As a tourist destination, Dholpur has high influx of tourists coming here throughout the year. Commuting within the city can be daunting task for these travelers. Hence, local government has made ample arrangements for local transportation in the form of auto rickshaws, buses, and other modes. Car rental services are also easily available in the city for those who prefer to travel by a private vehicle. 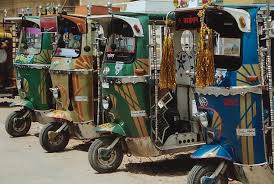 Auto rickshaws in Dholpur do not run by meter and you must fix fare before hiring them. They are commonly called as Tuk-Tuk across the state and are quite an interesting mode of transport along with decorated cycle rickshaws. Local buses also cover all the important routes within the district for sightseeing of its famous attractions.